Scroll down to view some Bellevue test data. Go to Results -- Coincidence, Correlation, or Causation? to see some data from the Bethel School District. Bethel adopted Discovering Mathematics and began using it in the 2006-07 school year.

Links to News Articles are below.

The Bellevue School District's Secondary Math Pilot - Fall 2009 Assessment Information is the basis for an analysis that shows a robust favoring of Hold Math over Discovering Mathematics. Chart 2 from this analysis is presented below. Download the Pilot Analysis. This chart can also be viewed online. 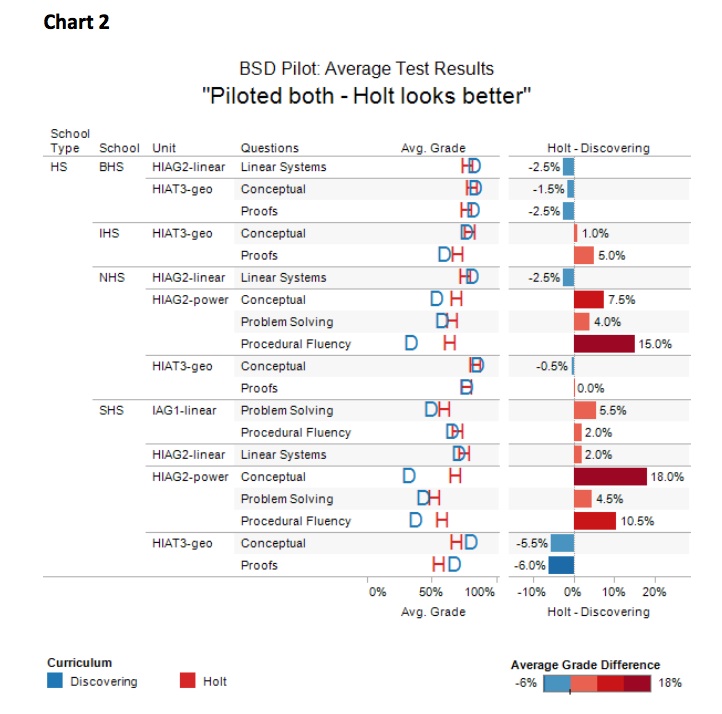 Clarification about the Seattle Lawsuit and some very relavent data from Bellevue.

DataMatters responds to bellevuemom at School district should drop Discovering math curriculum from consideration Feb 12 2010 Patricia Magnani, Bellevue Reporter
As to the law. RCW 28A.645.010 provides that anyone aggrieved by any school board decision has 30 days to appeal the decision to the Superior Court where the school board is located (King County).

The Superior Court will hear the appeal de novo which means the court is not supposed to give any deference to the school board decision, but instead to literally decide the issue again (RCW 28A.645.030).

The School Board is responsible for certifying the complete transcript of all the evidence it used to make its decision (RCW 28A.645.020).

The standard the court used is described in:

“4. The court finds, based upon a review of the entire administrative record, that there is insufficient evidence for any reasonable Board member to approve the selection of the Discovering Series. “

and from this and findings of fact the court came to the following Conclusions of Law:

“1. The court has jurisdiction under RCW 28A.645.010 to evaluate the Board’s decision for whether it is arbitrary, capricious, or contrary to law;

2. The Board’s selection of the Discovery Series was arbitrary;

3. The Board’s selection of the Discovery Series was capricious;

4. This court has the authority to remand the Board’s decision for further review; “

The court is not choosing a math curriculum. It is simply exercising its legal authority over a school board that failed in its oversight responsibility when some of its member’s rubber stamped a recommendation from the administration.

If you are suggesting that there should be no higher authority than a school board of elected officials and thus all their decisions should be absolute, I can't agree with that. As a reasonable individual if you see a government body making a mistake would you not want a means to challenge it?

I have spent a good deal of time looking at the WASL data and Seattle has schools among the worst in the State with both poor math pass rates and high achievement gaps yet the judge found no information in the record provided by the district that school board members who voted to adopt Discovering considered this data.

Even a district such as Bellevue has terrible achievement gaps at 4th grade during the school years 2003-04 through 2007-08, inclusive, a 5 year period during which inquiry based program TERC Investigations was being used. The data comes from the OSPI report card Web site. All the percentages below are 4th grade enrollment weighted averages over the 5 year period to smooth out year to year variation. I did not have the 2009 WASL data when I did these calculations but including it is unlikely to move the averages much.

Newport Heights in Bellevue has a White Pass rate of 76% and a Low-Income student pass rate of 60%. It has a gap of 16 points with 15% of its students Low-Income. A 74% overall pass rate means that 26% failed the 4th grade WASL.

Spiritridge in Bellevue has a White Pass rate of 81% and a Low-Income student pass rate of 32%. It has a huge gap of 49 points with 24% of its students Low-Income. It has 70% overall pass rate so that 30% failed the 4th grade WASL.

Bellevue schools have 7 elementary schools with White to Low-Income achievement gaps of more than 30 points during the 2003 to 2007-08 period.

I think you will agree that the above results are pretty dismal. Perhaps you can see why many parents are unhappy. These results should help you to realize how the poor math performance in HS starts with many students in Elementary school where many failed to learn the fundamentals with TERC.

People of good conscience brought this suit for sound reasons. There are real problems with achievement gaps in many school districts throughout the state. Regardless of the assurances made by the esteemed advocates of Discovery based learning the achievement gap is still a huge problem and after 10+ years of using these curricula it is not getting any better.

In addition, studies by WSU's SESRC reports that 49% of HS students from the Class of 2007 entering 2 year WA colleges needed to take remedial math courses to prepare themselves for college level work. These are no credit courses. See http://www.sesrc.wsu.edu/PugetSound/K12/gfs/Was... for more info.

I encourage you to take a look at John Hattie's book, "Visible Learning", page 205 where he outlines the steps involved in Direct Instruction and the importance of feedback between individual students and the teacher to correct misunderstanding and mistakes. He also compares the effect sizes of DI and Inquiry based instruction and discusses the issue of time efficiency in the classroom. These are important in the teaching and learning of all students but low-income students will see the biggest gains because they arrive at school with a lower stock of knowledge and generally will not find math teaching support at home.

We can do much better with a DI model (note this does not mean drill-and-kill) than we are doing with the Inquiry based model.
Click on Results Coincidence, Correlation, or Causation? to see three years of data. 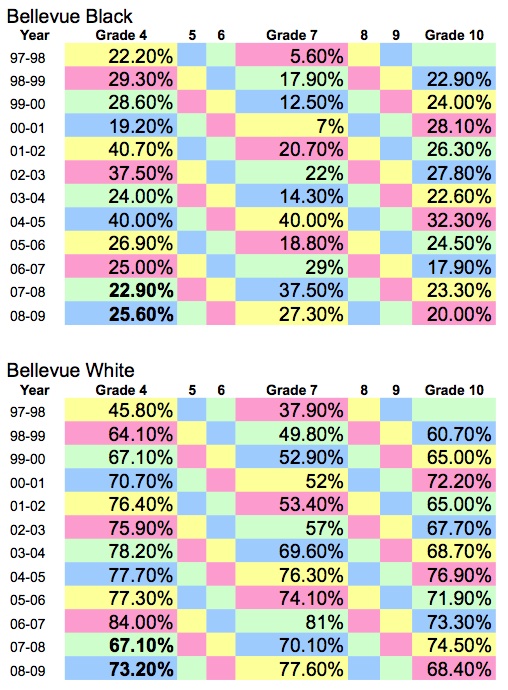 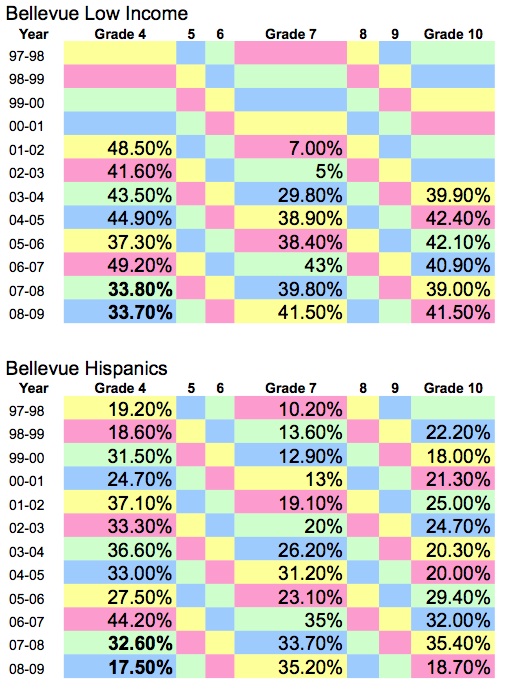 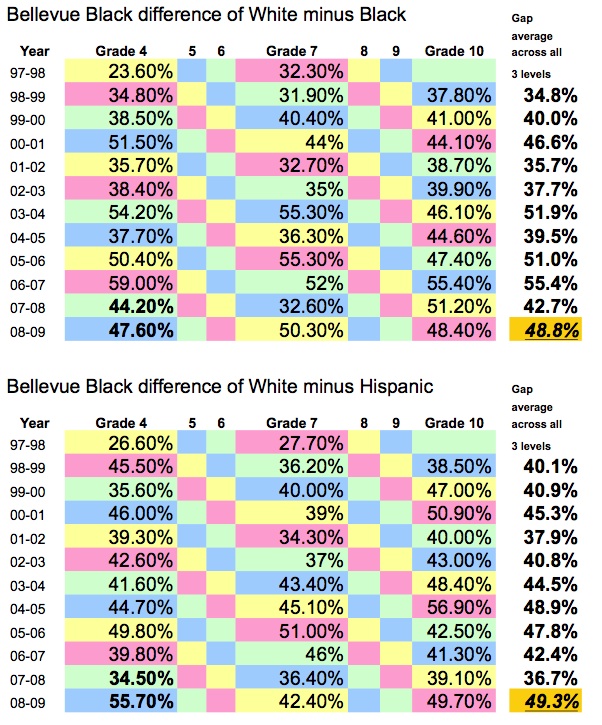 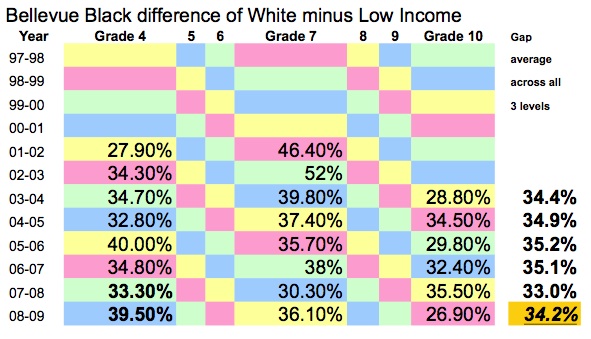 The group, Parents Interested in Bellevue Schools Math, invites you to:

Find out and ask questions about...
the two new middle/high school math series that are being considered
what the new Washington State math standards mean for your child
the new Washington "end-of-course assessments" (which will replace the
WASL as a high school graduation requirement), and
how students can best prepare for their chosen futures

Offer your opinions to members of the Bellevue School District's Math Adoption Committee about…
what you want for your children and the two piloted math textbooks that will be used by all current school-age students (next adoption most likely in 8 - 12 years, judging by the District's
past adoption schedule)

This event gives parents and other community members a final opportunity to compare the two Algebra-Geometry series the Bellevue School District is considering. It offers a side by side comparison of Holt and Discovering; relevant background information from a panel of experts; and an open forum for questions and comments. Input will be passed on to the BSD math adoption committee.

Dr. Polle Zellweger, a computer scientist and BSD parent.
Bob Brandt, an engineer and math teacher who served on the WA State math committee that recently revised standards and recommended new curricula.
Dr. Cliff Mass, a meteorologist and UW professor who recently was a plaintiff in the law suit against Seattle School Board for its selection of Discovering.
Dave Orbits, an engineer and researcher who has compiled and analyzed data on the achievement gap.

Click here to download the pdf flyer for this meeting. the flyer is in English and Spanish.