"Issues and Action in Education"
The Roll-Out of the Marc Tucker/Obama/Arne Plan
By Donna Garner February 17, 2010

Think… cradle to grave. With Race to the Top and Common Core State Standards, is this plan now in place?

This is a very influential group of individuals. Curious as to what they are doing today, eighteen years after the letter? Have these folks influenced the current push to reform education?

David Rockefeller
he is a leading fourth-generation member (known as "the Cousins") of the prominent Rockefeller family, serving on many boards of the family's institutions.
In 1991, he was elected by his cousins to succeed his father as Chairman of Rockefeller Financial Services,
In October 2006, the Rockefeller Foundation announced the appointment of David Jr. to its board of trustees
http://en.wikipedia.org/wiki/David_Rockefeller,_Jr.

John Sculley
CEO of Apple on April 8, 1983, a position he held until leaving in 1993. Sculley is currently a partner in Sculley Brothers, a private investment firm formed in 1995.
Sculley turned his attention to politics in the early 1990s on behalf of Republican Tom Campbell, who in 1992 was running in California for a United States Senate seat. Sculley hosted a fund-raiser for Campbell at his ranch in Woodside. Sculley had become acquainted with Hillary Clinton, serving with her on a national education council.
http://en.wikipedia.org/wiki/John_Sculley

Dave Barram
November 08, 2004 Barram, 60, served as administrator of the U.S. General Services Administration (GSA) from 1996 until 2001. In addition to heading the GSA, he was vice chairman of the President’s Management Council, which comprises the chief operating officers of the executive branch agencies. From 1993 until 1996, he was deputy secretary and chief operating officer of the U.S. Department of Commerce.
Prior to his government service, Barram spent 23 years in the technology industry. After 13 years at Hewlett-Packard, he joined Silicon Graphics as its first vice president of finance and CFO. He then joined Apple Computer as vice president and CFO, and also held the positions of vice president for corporate communications and vice president for worldwide corporate affairs and public policy. Barrram holds a master’s degree in business administration from Santa Clara University and a bachelor’s degree from Wheaton College. He is also a director of Pope and Talbot and NetIQ Corporation.
http://www.csc.com/newsroom/press_releases/2870-csc_elects_david_j_barram_director

Tim Barnicle
Jobs for the Future. As senior advisor for JFF's Workforce and Education Policy Group, Tim Barnicle helps JFF's leadership shape its policy agenda, as well as implement it in the often volatile federal public policy arena.
Prior to JFF, Mr. Barnicle was director of the Workforce Development Strategies Group at the National Center on Education and the Econony. Before that, he was assistant secretary of Labor for policy and the Employment and Training Administration, and the ETA's Boston regional administrator. He has also served as senior policy advisor to U.S. Senators Hubert Humphrey (D-MN) and John Kerry (D-MA).
Mr. Barnicle received his Bachelor's degree from Assumption College in Worcester, Massachusetts and his Master of Public Administration degree from Syracuse University.
http://www.jff.org/staff-member/tim-barnicle/853

Dave Barram
November 08, 2004 Computer Sciences Corporation (NYSE: CSC) today announced that its board of directors has elected David J. Barram as a director.

Barram, 60, served as administrator of the U.S. General Services Administration (GSA) from 1996 until 2001. In addition to heading the GSA, he was vice chairman of the President’s Management Council, which comprises the chief operating officers of the executive branch agencies. From 1993 until 1996, he was deputy secretary and chief operating officer of the U.S. Department of Commerce
http://www.csc.com/newsroom/press_releases/2870-csc_elects_david_j_barram_director

Andy Plattner
Plattner Communications & Public Affairs
http://www.plattnercommunications.com/who_we_are.html
Plattner, 59, served as a senior consultant to the National Center on Education and the Economy in Washington, DC, where he helped bring the public’s voice into the development of rigorous academic standards and tests.


Betsy Brown Ruzzi
NCEE staff
Betsy Brown Ruzzi is the Associate Director of the New Commission on the Skills of the American Workforce at the National Center on Education and the Economy. Ms. Brown Ruzzi managed the Commission's international benchmarking effort and oversaw the commissioning of over a dozen papers that provided background information to the Commission during its deliberations. Ms. Brown Ruzzi also authored reports on international systems of early childhood education, student testing, teachers, education ministries, and country studies of Finland and India and directed the Commission's communications and public outreach efforts. Ms. Brown Ruzzi also works with the US Department of Labor as it develops new policy and programming, particularly focused on standards-based curriculum and instruction for young people who have dropped out of school and are participating in alternative education programs. Betsy recently returned to NCEE after serving as Vice President of Touchstones, a company that develops and distributes critical thinking and problem solving curriculum. During her career at the National Center she helped create the National Institute for School Leadership, the National Skill Standards Board, the Commission on the Skills of the American Workforce, the High Skills State Consortium, and the National Board for Professional Teaching Standards, all initiatives to improve the academic performance of our nation's students and strengthen the skills of our workforce. Prior to joining the National Center, Betsy worked on Capitol Hill.
http://www.ncee.org/wfd/staff/index.jsp;jsessionid=aDrBe7Fz7jVb?setProtocol=true
RttTj asseessmen application contact person for
State Consortium on Board Examination Systems (SCOBES)
http://www.edweek.org/media/rtttnarrative%20final.pdf

Bob Schwartz
Harvard Graduate School of Education HGSE
Robert Schwartz held a wide variety of leadership positions in education and government before joining the HGSE faculty in 1996. From 1997 to 2002, Schwartz also served as president of Achieve, Inc., an independent, bipartisan, nonprofit organization created by governors and corporate leaders to help states improve their schools. From 1990 to 1996, Schwartz directed the education grantmaking program of The Pew Charitable Trusts, one of the nation's largest private philanthropies. In addition to his work at HGSE, Achieve, and The Pew Charitable Trusts, Schwartz has been a high-school English teacher and principal; an education advisor to the mayor of Boston and the governor of Massachusetts; an assistant director of the National Institute of Education; a special assistant to the president of the University of Massachusetts; and executive director of The Boston Compact, a public-private partnership designed to improve access to higher education and employment for urban high-school graduates. Schwartz has written and spoken widely on topics such as standards-based reform, public-private partnerships, and the transition from high school to adulthood.
http://www.gse.harvard.edu/faculty_research/profiles/profile.shtml?vperson_id=170

Mike Smith
Mike Smith Returns to Ed. Dept. as a Senior Adviser “I’m working with a team on the implementation of the stimulus package, which is a big part of my time, and other duties as requested by the secretary,” said Smith, who served as both the undersecretary and acting deputy secretary at the federal agency for seven years during the Clinton administration.
http://blogs.edweek.org/edweek/campaign-k-12/2009/02/mike_smith_returns_to_ed_dept.html
Director for education at the William and Flora Hewlett Foundation.   Smith has directed the education program at the Hewlett Foundation since 2001. He was Under Secretary in the U.S. Department of Education from 1993 to 2000 and Acting Deputy Secretary from 1996 to 2000. In those roles, he directed the development and enactment of Goals 2000 and other major federal legislative initiatives and served as chief operating officer of the 5,000-person federal agency. Smith was dean of the Stanford University School of Education from 1986 to 1993 and director of the Wisconsin Center for Education Research from 1980 to 1986. He taught at the Harvard Graduate School of Education from 1976 to 1996, after earning a bachelor's degree at Harvard College and graduate degrees at the HGSE. Smith is a widely published education researcher. He is a member of the National Academy of Education and a former chairman of the board of the American Institutes of Research. He has served on numerous commissions and committees of the National Research Council and been a consultant to many government agencies, foundations, and non-profit organizations such as the Education Testing Service, and to foreign governments.
http://www.educationsector.org/profiles/profiles_show.htm?doc_id=336593&attrib_id=12244

Bill Spring can’t find info
Shirley Malcom
Shirley Malcom is Head of the Directorate for Education and Human Resources Programs of the American Association for the Advancement of Science (AAAS). Dr. Malcom serves on several boards (including the Heinz Endowments and the Heinz Center for Science, Economics and the Environment), is a trustee of Caltech, honorary trustee of the American Museum of Natural History, and former trustee of the Carnegie Corporation of New York. In 2006 she was named co-chair (with Leon Lederman) of the National Science Board Commission on 21st Century Education in STEM. She serves as a Regent of Morgan State University and a fellow of the AAAS and the American Academy of Arts and Sciences. She has chaired a number of national committees addressing education reform and access to scientific and technical education, careers and literacy. She served on the National Science Board, the policymaking body of the National Science Foundation (1994 – 1998), and on the President's Committee of Advisors on Science and Technology (1994 – 2001). Dr. Malcom received her doctorate in ecology from Pennsylvania State University, and holds 15 honorary degrees. In 2003 Dr. Malcom received the Public Welfare Medal of the National Academy of Sciences, the highest award given by the Academy.
http://mobilizingstem.wceruw.org/criticaladvisorBios.html
http://mitworld.mit.edu/speaker/view/15
http://events.caltech.edu/events/event-922.html

Ray Marshall former Labor Secretaries
Freddie Ray Marshall (born August 22, 1928) is the Professor Emeritus of the Audre and Bernard Rapoport Centennial Chair in Economics and Public Affairs at the University of Texas at Austin.
http://en.wikipedia.org/wiki/Ray_Marshall

Notable NCEE Trustees at the time of the Dear Hillary letter include:
Mario M. Cuomo
John Sculley
Hillary R. Clinton
Ira C. Magaziner
Mr. Break-It: the not very reassuring past of Ira Magaziner, the brains behind the Health Care Task Force.
http://www.thefreelibrary.com/Mr.+Break-It%3A+the+not+very+reassuring+past+of+Ira+Magaziner,+the...-a013786314
He now serves as chairman of the William J. Clinton Foundation's international development initiatives, which are at the forefront of non-governmental organizations in addressing Global Health and Environmental issues.
http://en.wikipedia.org/wiki/Ira_Magaziner

Interesting Connections and Reach Involving Some of the Above Individuals and Education in Washington State. This chart is old but the connections give an idea of the scope of influence. Click here to go to the chart online. This chart is comes from the LEARN http://www.learn-usa.com/ website. 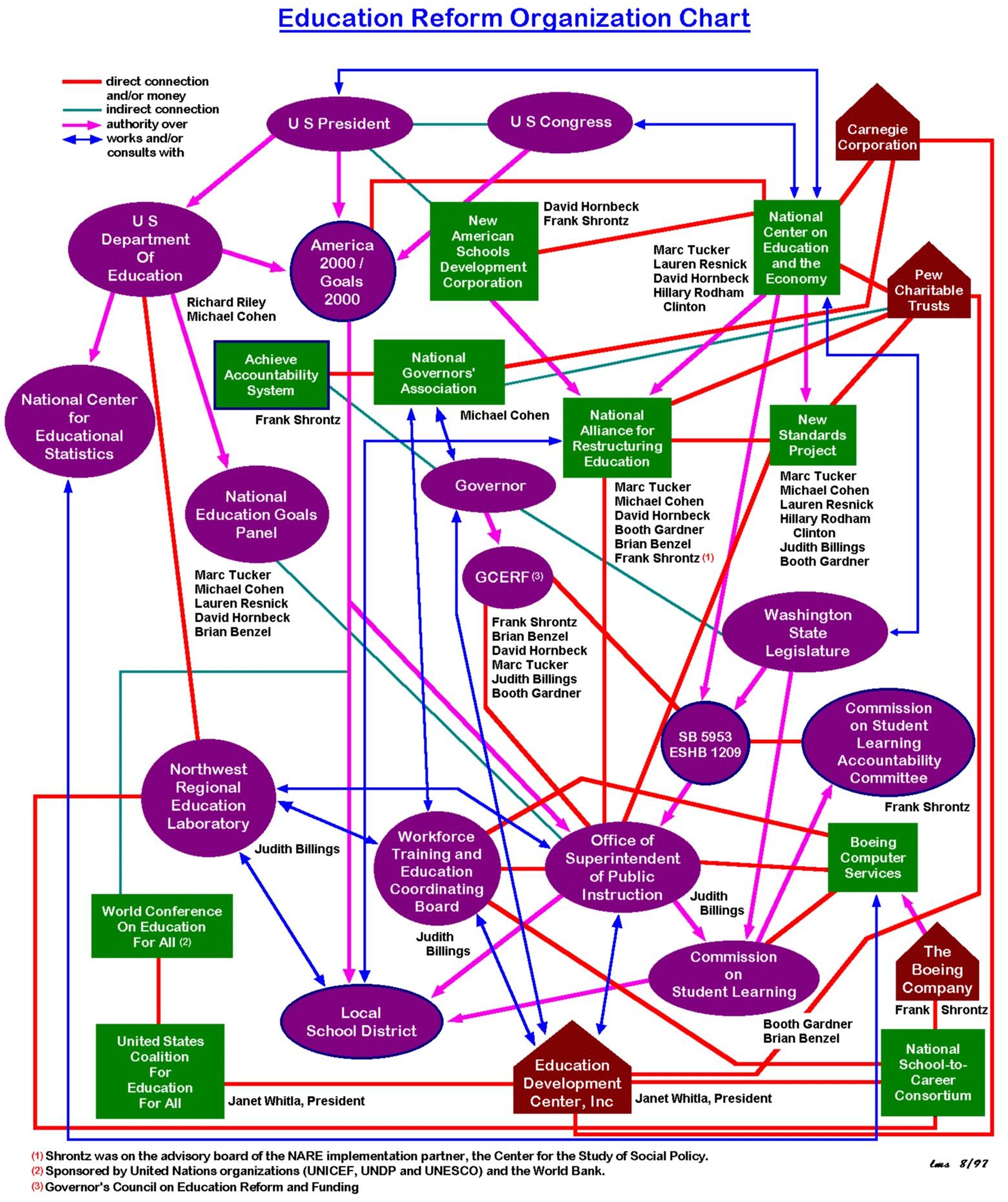