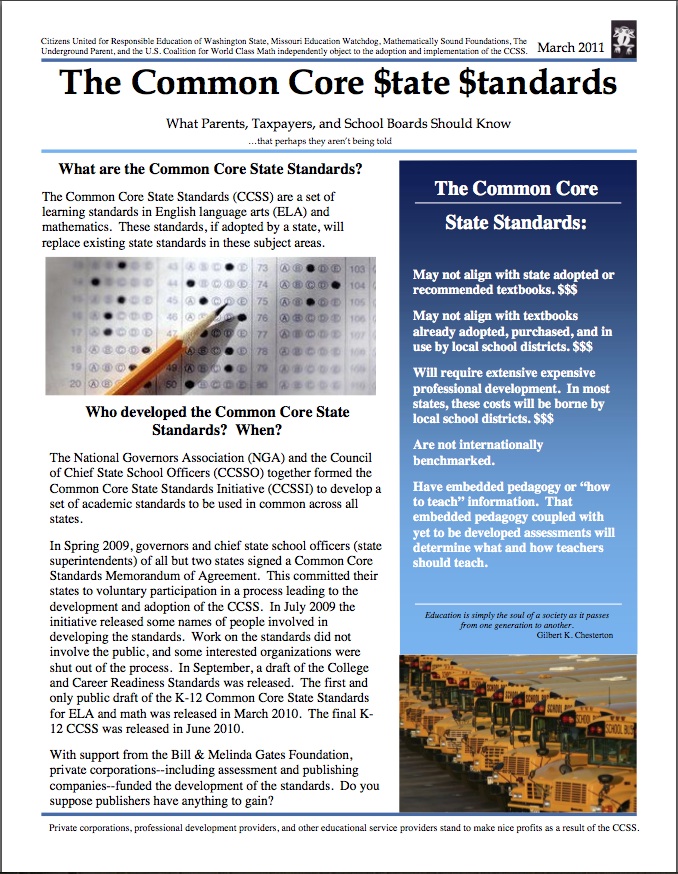 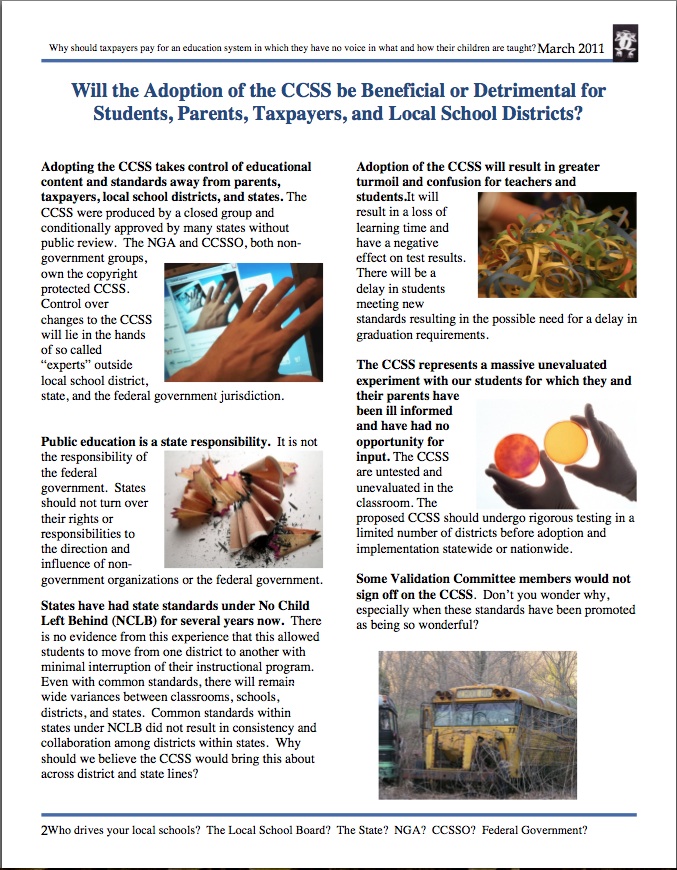 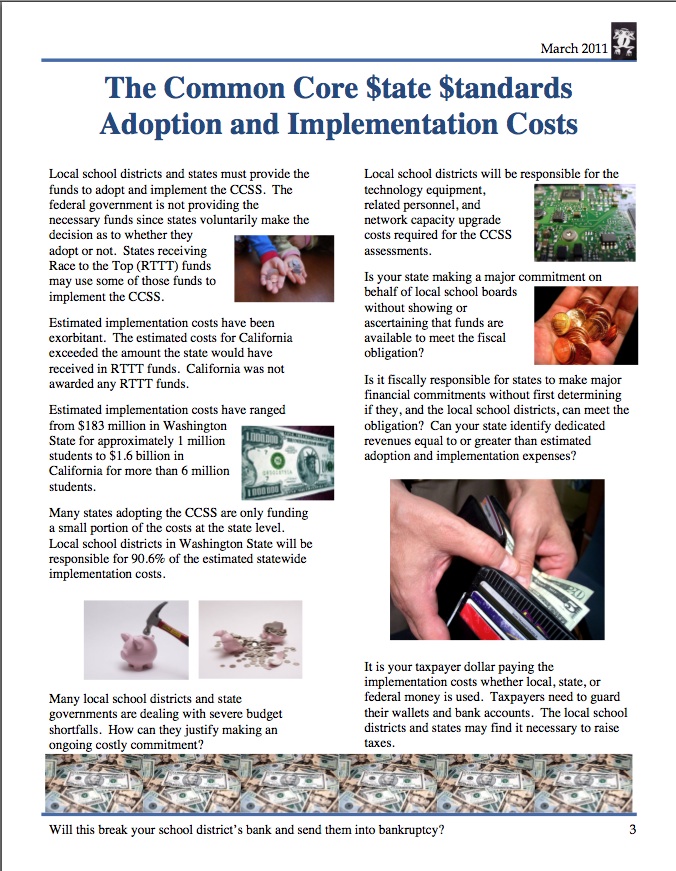 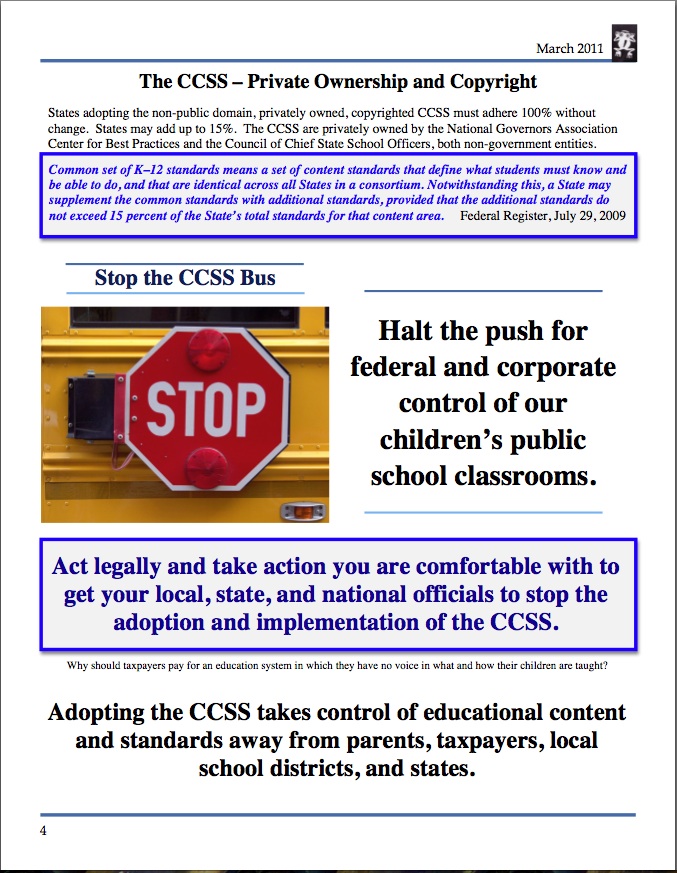 What Parents, Taxpayers, and School Boards Should Know About
The Common Core $tate $tandards
…that perhaps they aren’t being told


What are the Common Core State Standards?

The Common Core State Standards (CCSS) are a set of learning standards in English language arts (ELA) and mathematics. These standards, if adopted by a state, will replace existing state standards in these subject areas.

Who developed the Common Core State Standards? When?

The National Governors Association (NGA) and the Council of Chief State School Officers (CCSSO) together formed the Common Core State Standards Initiative (CCSSI) to develop a set of academic standards to be used in common across all states.

In Spring 2009, governors and chief state school officers (state superintendents) of all but two states signed a Common Core Standards Memorandum of Agreement. This committed their states to voluntary participation in a process leading to the development and adoption of the CCSS. In July 2009 the initiative released some names of people involved in developing the standards. Work on the standards did not involve the public, and some interested organizations were shut out of the process. In September, a draft of the College and Career Readiness Standards was released. The first and only public draft of the K-12 Common Core State Standards for ELA and math was released in March 2010. The final K-12 CCSS was released in June 2010.

With support from the Bill & Melinda Gates Foundation, private corporations--including assessment and publishing companies--funded the development of the standards. Do you suppose publishers have anything to gain?


The Standards for English Language Arts and Literacy in History/Social Studies, Science, and Technical Subjects (ELA):


Will the Adoption of the CCSS be Beneficial or Detrimental for Students, Parents, Taxpayers, and Local School Districts?

Adopting the CCSS takes control of educational content and standards away from parents, taxpayers, local school districts, and states. The CCSS were produced by a closed group and conditionally approved by many states without public review. The NGA and CCSSO, both non-government groups, own the copyright protected CCSS. Control over changes to the CCSS will lie in the hands of so called “experts” outside local school district, state, and the federal government jurisdiction.

States have had state standards under No Child Left Behind (NCLB) for several years now. There is no evidence from this experience that this allowed students to move from one district to another with minimal interruption of their instructional program. Even with common standards, there will remain wide variances between classrooms, schools, districts, and states. Common standards within states under NCLB did not result in consistency and collaboration among districts within states. Why should we believe the CCSS would bring this about across district and state lines?

Adoption of the CCSS will result in greater turmoil and confusion for teachers and students. It will result in a loss of learning time and have a negative effect on test results. There will be a delay in students meeting new standards resulting in the possible need for a delay in graduation requirements.

The CCSS represents a massive unevaluated experiment with our students for which they and their parents have been ill informed and have had no opportunity for input. The CCSS are untested and unevaluated in the classroom. The proposed CCSS should undergo rigorous testing in a limited number of districts before adoption and implementation statewide or nationwide.

Some Validation Committee members would not sign off on the CCSS. Don’t you wonder why, especially when these standards have been promoted as being so wonderful?

Will the CCSS be Assessed?

The U.S. Department of Education (USED) has provided over $350 million in grant funds to two consortia for assessment development. The consortia are the Partnership for the Assessment of Readiness for College and Careers (PARCC) and the SMARTER Balanced Assessment Consortium (SBAC). States adopting the CCSS may belong to and use the assessment from one consortium.

The assessments will be computer based. The consortia claim this will reduce costs for states. While it may reduce state costs, it will increase costs for local school districts, as they will need to have adequate computer equipment and network capacity throughout the year for students to have frequent access and experience with the computer assessment interface.

Computer assessments may not have the same validity and reliability as paper and pencil tests. It will be several years before results will reflect what the assessment intends, rather than student ability to use the assessment technology.

Implementation Schedule for CCSS and Assessments

Some states may begin implementing the CCSS as early as the 2011-12 school year. Other states may have a multi-year process to phase in the implementation of the CCSS. In most cases, the CCSS will be implemented by the 2013-2014 school year.

Check with your state education agency for your state’s implementation timeline.

Local school districts and states must provide the funds to adopt and implement the CCSS. The federal government is not providing the necessary funds since states voluntarily make the decision as to whether they adopt or not. States receiving Race to the Top (RTTT) funds may use some of those funds to implement the CCSS.

Estimated implementation costs have been exorbitant. The estimated costs for California exceeded the amount the state would have received in RTTT funds. California was not awarded any RTTT funds.

Many states adopting the CCSS are only funding a small portion of the costs at the state level. Local school districts in Washington State will be responsible for 90.6% of the estimated statewide implementation costs.

Many local school districts and state governments are dealing with severe budget shortfalls. How can they justify making an ongoing costly commitment?

Local school districts will be responsible for the technology equipment, related personnel, and network capacity upgrade costs required for the CCSS assessments.

Is your state making a major commitment on behalf of local school boards without showing or ascertaining that funds are available to meet the fiscal obligation?

Is it fiscally responsible for states to make major financial commitments without first determining if they, and the local school districts, can meet the obligation? Can your state identify dedicated revenues equal to or greater than estimated adoption and implementation expenses?

It is your taxpayer dollar paying the implementation costs whether local, state, or federal money is used. Taxpayers need to guard their wallets and bank accounts. The local school districts and states may find it necessary to raise taxes.

What Can Parents, Taxpayers, and School Boards Do?

Act at the Local, State, and National Level

Halt the push for federal and corporate control of our children’s public school classrooms.

Citizens United for Responsible Education of Washington State, Missouri Education Watchdog, Mathematically Sound Foundations, The Underground Parent, and the U.S. Coalition for World Class Math independently object to the adoption and implementation of the CCSS.

Download this as a colorful pdf by clicking here.